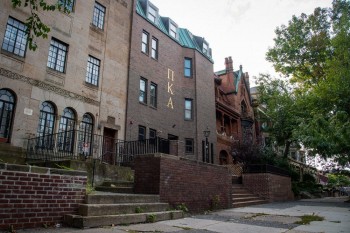 After being closed by the Penn Administration for the fall semester, the Beta Pi chapter house was permitted to reopen for the spring semester of 2021. Approximately half the Greek chapter houses on campus will remain closed. Beta Pi is fortunate to once again call 3916 Spruce Street home.

Unfortunately, only ten Beta Pi brothers are in residence. The remainder of the chapter brothers is either in Penn student housing or in private accommodations. Because the chapter house was not open in the fall, some brothers signed one-year leases in apartments. The leases do not expire until the end of the 2020-2021 school year. Although the chapter house is open for the ten inhabitants, Penn does not allow non-resident brothers to enter the chapter house due to COVID-19 protocols. Fraternity-related activities, meetings, events, social gatherings, etc., are not permitted in the chapter house. Nevertheless, Beta Pi undergraduate members do participate in person for outdoor excursions in accordance with COVID-19 campus regulations.

A feature article in the Daily Pennsylvanian addressed the restrictions being placed by the Penn administration. The Associate Vice Provost for Student Affairs, Tamara Greenfield King, said, “The houses are 100% closed to all visitors. Even if you are a member of the fraternity or sorority, but you are not signed up to live in the house this semester, you cannot enter the homes, and that is purely safety and precaution”.

Students have been able to interact on the internet by using programs such as Gather, to simulate academic and recreational in-person interactions; Discord, an instant messaging platform used for gaming; and Notion, an online workspace platform.

The Daily Pennsylvanian article contained comments by three students, two being Beta Pi brothers, and the other a sorority member. Commenting in the article were Obed Antoine, Beta Pi President, and Interfraternity Council President Kaden Stenger, who is also Beta Pi Internal Vice President. Accompanying the article was an attractive photo of the Pi Kappa Alpha chapter house.

Not in the article was any mention of changes being contemplated for student dining plans. COVID-19 campus regulations discourage any plans to be able to use the chapter house kitchen by a fraternity, as only ten brothers maximum could appear for a meal and a chef/cook cannot be brought in from outside. Making matters worse, the Penn administration’s mandate, that all sophomores must reside in Penn Student Housing, is to begin in the fall of 2021. On February 15, 2021, the Penn administration announced that all sophomores will be required to participate in a Penn dining plan starting this coming fall semester. The minimum cost for a sophomore meal plan is $3996. The student reaction to this pronouncement has been to prepare a petition asking the Penn administration to cancel the requirement for sophomores to participate. The petition has been able to gather over 400 signatures in the first 48 hours following the announcement. Student comments describe the dining plans as “incredibly expensive” and “absurdly expensive”.