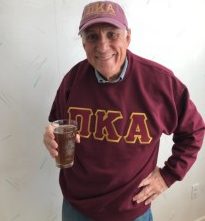 Founders Day 2022 will be held on Saturday, March 26, 2022, at the Sheraton Philadelphia University City Hotel (3549 Chestnut Street). The event will begin with a cocktail hour (cash bar) at 6:00PM followed by a buffet dinner beginning at 7:00PM. The basic charge for attending the dinner is $120 per person.

If you are planning to attend the dinner, please do the following:

Due to COVID-19 protocols, Founders Day 2020 and 2021 in-person celebrations were not possible. This will be the first opportunity for all Beta Pi brothers to gather and commemorate the founding of Beta Pi in 1920. BETA PI IS NOW OVER 100 YEARS OLD. Join us at this Centennial event to acknowledge and honor the fraternity that has meant so much to so many.

A Pike Has a Memorable Birthday

On December 1, 2021, Morty Cohen, Beta Pi ’65, celebrated his 75th birthday. On this occasion, his children, including Joey Cohen, Beta Pi ’02, presented him with an assortment of PiKA gifts, including a sweatshirt, collared dress shirt, baseball cap, boxer shorts, and a drinking glass, all emblazoned with Pi Kappa Alpha logos.

The annual happy hour gathering, organized by Parker Weil, Beta Pi ’85, will be held in New York City on Thursday, March 3, 2022, from 6-8 pm at the Draught 55 Bar and Kitchen located on E.55th Street between 2nd and 3rd Avenues. A large contingent of brothers has already indicated an intention to attend. No RSVP is necessary. If you wish, you can contact Parker by email at [email protected].

MAKE ROOM ON YOUR CALENDAR FOR THIS SPECIAL EVENT

On December 12, 2021, Bruce Wolfson, Beta Pi ’71, and his wife Ellen’s daughter Tamara was married to Anna Posner. The ceremony and reception were held at the Tappan Hill Mansion in Tarrytown, New York. Tamara and Anna are living in the United Kingdom. Tamara serves as Cantor at the Alyth Synagogue and Anna serves as Rabbi at the Norwich Liberal Jewish Community synagogue. Both synagogues are in London.

Mazel Tov to the newlyweds and their parents.

The winter 2021 issue of Shield & Diamond thanks many Beta Pi brothers for their loyalty and generosity to Pi Kappa Alpha.

As was reported in our November 2021 eletter, Beta Pi’s team effort in total donations toward the PIKE Now Chapter Challenge was worthy of a 2nd place finish among all chapters. Pi Kappa Alpha Inter/National published the final figures that show the total of all donations from all sources to be $250,386. The final tally for Beta Pi is $20,246.32. These donations will be used to address mental health issues, provide operational support for chapter management, raise leadership skills, and promote personal development.

For the first time in the Shield & Diamond, Kaden Stenger ’19 was named as a student Vice President for the 2021-22 Pi Kappa Alpha Supreme Council. In addition, his photo was published with a history of his accomplishments, at Penn and in the communities that he lives, that warranted his appointment to the Supreme Council.