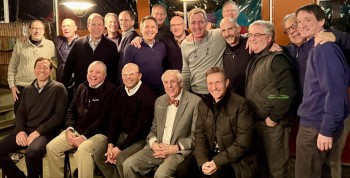 On Wednesday, December 8, 2021, twenty-one Beta Pi brothers complied with COVID-19 protocols and defied the cold weather to thoroughly enjoy a fabulous feast at the 5th Annual Beta Pi dinner at the Calle Ocho Restaurant on Broadway at 106th Street in New York City.

Jeff Kaufman ’80, the organizer of this event, was ably assisted by Rob Stavis ’81, who hosted the event. Entering the large and well-appointed restaurant, guests are greeted with a long sit-down bar to the left and seating to the right. On this night, Beta Pi brothers were led to an outdoor space that was enclosed, perfectly heated for everyone’s comfort, and had its own bar.

The bar was open all evening and never stopped as waiters took orders and delivered fresh drinks to the brothers during the cocktail hour and during the meal. Prior to the sit-down dinner, mingling groups of 2, 3, and 4, renewed old acquaintances and swapped stories and updates on families (including children and grandchildren), careers, and memories of fraternity life at Penn. During the cocktail hour, an assortment of delectable appetizers was passed around by the wait staff. It was hard to keep up with the waiters as they brought out tray after tray from the kitchen.

All in attendance had a great time. If you can’t believe this, check out the smiles in the photo accompanying this article. As the festive occasion was coming to an end, many of the brothers thanked Rob and Jeff for the best annual Beta Pi dinner they have ever attended.

DO NOT MISS NEXT YEAR’S NEW YORK CITY DINNER!