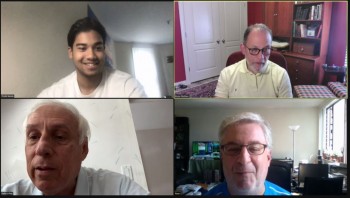 The current undergraduate brothers of Beta Pi are seeking to have an enhanced relationship with Beta Pi alumni. At the request of Protik Nandy ’20, a Zoom conference was held on September 3, 2021, to discuss ways the undergraduates and the alumni could cooperate for the betterment of the Beta Pi chapter.

Brother Nandy informed the AA that this year begins the University of Pennsylvania’s new mandate requiring all sophomores to live in University Housing. Although a large majority of the fraternity houses, including Pi Kappa Alpha, are owned and managed by the Penn administration, including setting and collecting the rents, and establishing binding rules of behavior (e.g. no alcohol on premises, no parties without Penn approval, etc.), fraternity houses are not considered to be University Housing. In addition, all sophomores are now required to have dining contracts with Penn. Nevertheless, for the first time in years, dinners will be served at the Chapter House for the benefit of the juniors and seniors.

The undergraduate members are seeking ways to generate interest in the alumni to attend Homecoming and Founders Day. It was decided that greater notice is to be given of the dates for these events. Although Homecoming is already upon us, the undergraduates would like to know what they can do to entice the alumni to visit before and/or after the Homecoming football game. If any alumnus has ideas, send your idea(s) to Morty Cohen at email address [email protected] Use “Beta Pi” on the subject line. Founders Day 2022 is scheduled for Saturday, March 26. Mark your calendars. Further information will be forthcoming in future eletters.

Many of our newly initiated brothers are finding it difficult to cope with the financial burdens associated with belonging to a fraternity at Penn. It was decided to investigate the possibility of setting up scholarships recognizing leadership and fraternity participation. These scholarships would be funded by the Chapter Endowment Fund (CEF). The Beta Pi CEF, that is managed by Pi Kappa Alpha Inter/National, is presently the second largest in all of Pi Kappa Alpha with an approximate balance of $248,000.

The officers of the AA look forward to a closer relationship with the active members of the chapter.