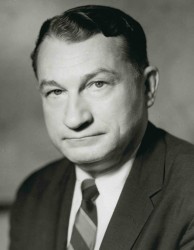 Patrick M. Malin was one of the founding fathers of Beta Pi chapter of Pi Kappa Alpha when it was founded on November 30, 1920. He graduated from the Wharton School of Finance and Commerce at the University of Pennsylvania, as valedictorian, in 1924. Rather than return to his home in Missouri to work in his father’s bank, he embarked on a lifetime career as a proponent for civil rights for the underprivileged; a career that eventually led him to be appointed Executive Director, the highest position, at the American Civil Liberties Union (ACLU), the foremost advocate and champion for civil justice in the United States for the last 100 years.

After graduating from Penn, brother Malin served as private secretary to International Young Men’s Christian Association director, Sherwood Eddy. In this capacity, he met Caroline Biddle. After a four-year courtship, they were married in 1928. It was in the 1920’s that he joined the ACLU, a civil rights organization that was in its infancy, having been established in 1920.

From 1930-1950, brother Malin was a member of the department of economics at Swarthmore College. During this time, he remained a member of the ACLU. As World War II was beginning, he temporarily stepped away from teaching to become the senior American member of the secretariat of the Intergovernmental Committee for Refugees, headquartered in London, that sought to resettle European refugees. In September 1940, he was chosen by President Franklin D. Roosevelt to issue Visas to Jewish refugees that had landed by ship, for the sole purpose to refuel, in Norfolk, Virginia. The Visas allowed these refugees to remain in the United States.

In 1950, brother Malin became only the second Executive Director of the ACLU. Under his leadership and guidance, membership in the ACLU tripled within five years to 30,000, and steadily grew through the years to 275,000 by 1974. The ACLU currently has approximately 1,200,000 members. Besides building membership on a national scale, he presided over an expansion of local ACLU affiliates. Brother Malin served as Executive Director of the ACLU until 1962. He passed away in 1964.

Until the 1950’s, ACLU policy was controlled by a select circle of New Yorkers. The ACLU focused primarily on free speech. Under brother Malin, the ACLU bylaws were amended to permit the local affiliates to influence policy decisions. In addition, bi-annual conferences were scheduled open to the entire membership. At these conferences, members were permitted to speak and suggest areas that ACLU advocacy was needed and later litigated, e.g. abortion rights, the death penalty, and rights of the disadvantaged and minorities.

Among the successes, during brother Malin’s tenure as Executive Director, were the removal of Bible reading in public schools and ending the observance of religious holidays in public schools. The ACLU fought against the banning of certain books and movies in many communities. Eventually, movie censorship by communities was discontinued. The liberalization of public standards resulted in a massive reduction in prosecution for obscenity.

In 1954, the ACLU filed an amicus curiae brief in the case of Brown v. Board of Education, the U.S. Supreme Court decision that led to the ban of racial segregation in public schools.

Under his guidance, the ACLU in Philadelphia was primarily responsible for the establishment of the first civilian police review board. In 1961, the ACLU prevailed in a case where the U.S. Supreme Court required states to obtain warrants before home searches.

During the years when the House Un-American Activities Committee (HUAC) was holding hearings, featuring the memorable question, “Are you now or have you ever been a member of the Communist Party”, the ACLU was not an active participant. However, in 1957, the United States Supreme Court handed the ACLU significant victories in two cases that marked the beginning of the end of Communist Party membership inquiries.

Many consider the years under brother Malin to have been the most successful in strengthening the ACLU and for its achievements. For 12 years, he was steadfast in defending the actions of his organization, even when the ACLU positions were unpopular. However, he was humble enough to realize he may not have always been right. In that respect, he said, “For that reason, I believe all the more in free speech, because there is no way in which my friends and neighbors can be protected against my errors unless we make sure they have the full right to argue with me until the cows come home”.