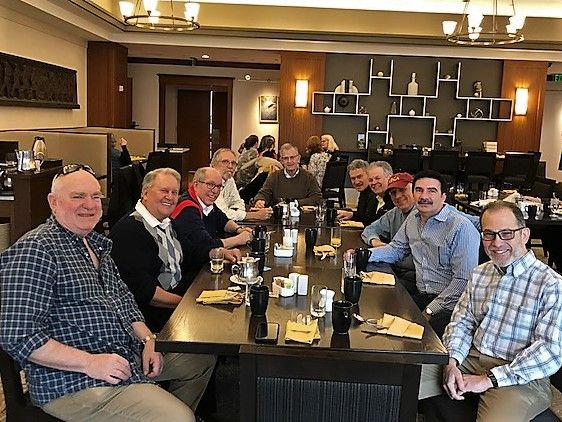 With Silicon Valley based brother Jeff Abramowitz making a somewhat rare visit to NYC in mid-July, six members of the Beta Pi 1980 initiation class took the opportunity to gather for dinner at Café Bianco in Manhattan near Penn Station. They also used the occasion to celebrate four of the brothers having recently turned 60 years old.

The discussions included baldness, Shirley’s recent bike accident, the economy, Covid (ugh), sports, families, kids, upcoming weddings, etc. They shared memories of the good times that can now be called great times. Some of these memories of course may have diminished due to the passage of time, or may have always been exaggerated, such as Larry O’s broken ankle in a sky-diving incident almost 40 years ago (he fell on the ice at Penn!).

One interesting and previously not well-known story was that of brother Jeff Abramowitz’ instrumental role in bringing about the first meeting of the legendary Steve Jobs and his future wife. When Jeff was attending Stanford University Graduate School of Business, he was co-chair for an event featuring a lecture by Steve Jobs. Prior to the lecture, Laurene Powell (also a Penn graduate) persuaded Jeff to cede to her the honor of introducing Steve Jobs to the audience. A seat had been assigned next to Steve Jobs for the person doing the introduction. That became Laurene Powell’s seat. A conversation between them led to dinner, that led to a relationship, that led to marriage. You never know. If brother Abramowitz had not ceded the opportunity to make the introduction, it could have been him getting married to one of the most famous tech titans and richest men in America! (Just kidding Shirley !).

As always, a good time was had by all.

Great times. Great stories and memories. If you have any stories or gatherings to share with us, please let us know. Also, at this writing it appears likely that Founders Day 2022 will happen in person in Philly . Don’t miss it. While we don’t have a date yet, please try to keep your schedules open and make plans to attend.