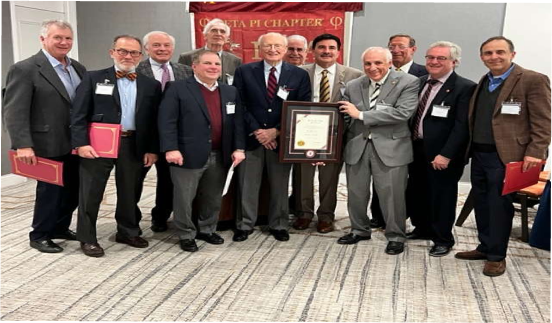 The summer issue of Pi Kappa Alpha’s Shield and Diamond magazine has given recognition to several Beta Pi brothers for their dedication and support for Pi Kappa Alpha.

Our undergraduate chapter was ranked 17th largest of the top 25 New Member recruitment classes of all of Pi Kappa Alpha for the spring semester 2021. Jonah Charlton, Beta Pi ’20, was Recruitment Chairman for this extraordinary class.

The University of Toledo’s Epsilon Epsilon chapter, as a result of a highly successful fund-raising campaign, raised $100,000 in one month for the benefit of its Chapter Endowment Fund (CEF). It has replaced Beta Pi as the chapter with the largest CEF. For many years, Beta Pi was the leading chapter with the largest CEF. Nevertheless, with a current CEF of $248,171, Beta Pi is close enough to be considered to have fulfilled the dream of our late brother, Gregg Ormond, Beta Pi ’74, that our CEF should have a balance of $250,000. These funds are for the use of our undergraduate members to cover certain costs of attendance at PIKE University events.

Alex Sun, Beta Pi ’20, joined Bruce Wolfson, Beta Pi ’71, to represent Beta Pi at the Pi Kappa Alpha leadership conference recently held in Memphis, home to PiKA Inter/National. Congratulations to Alex for distinguishing himself at the conference and earning a very high positive reputation for himself and Beta Pi at this annual event.

Bruce and his family recently moved to Nashville. He has a long-time relationship with PiKA Inter/National and has held and does hold several important positions on the national level.

Pi Kappa Alpha Inter/National reserves two Vice President positions on the Supreme Council for undergraduate brothers. This year, Kaden Stenger, Beta Pi ’19, is a candidate for one of these highly sought-after positions. Current members of the Supreme Council are looking seriously at Kaden’s application after a thorough investigation as to his qualifications. Hopefully, the Supreme Council’s choices for this year’s new members will be favorable for Kaden.

HOT OFF THE PRESSES: On September 1, 2021, Kaden Stenger was chosen to be one of the undergraduate student Vice Presidents for the PiKA Inter/National Supreme Council. Complete coverage of Kaden’s accomplishment will be available in the Beta Pi October 2021 eletter.